The cyclic process of “pushing yourself hard for a week, getting something done, and then feeling depressed and fucked up for the next week” 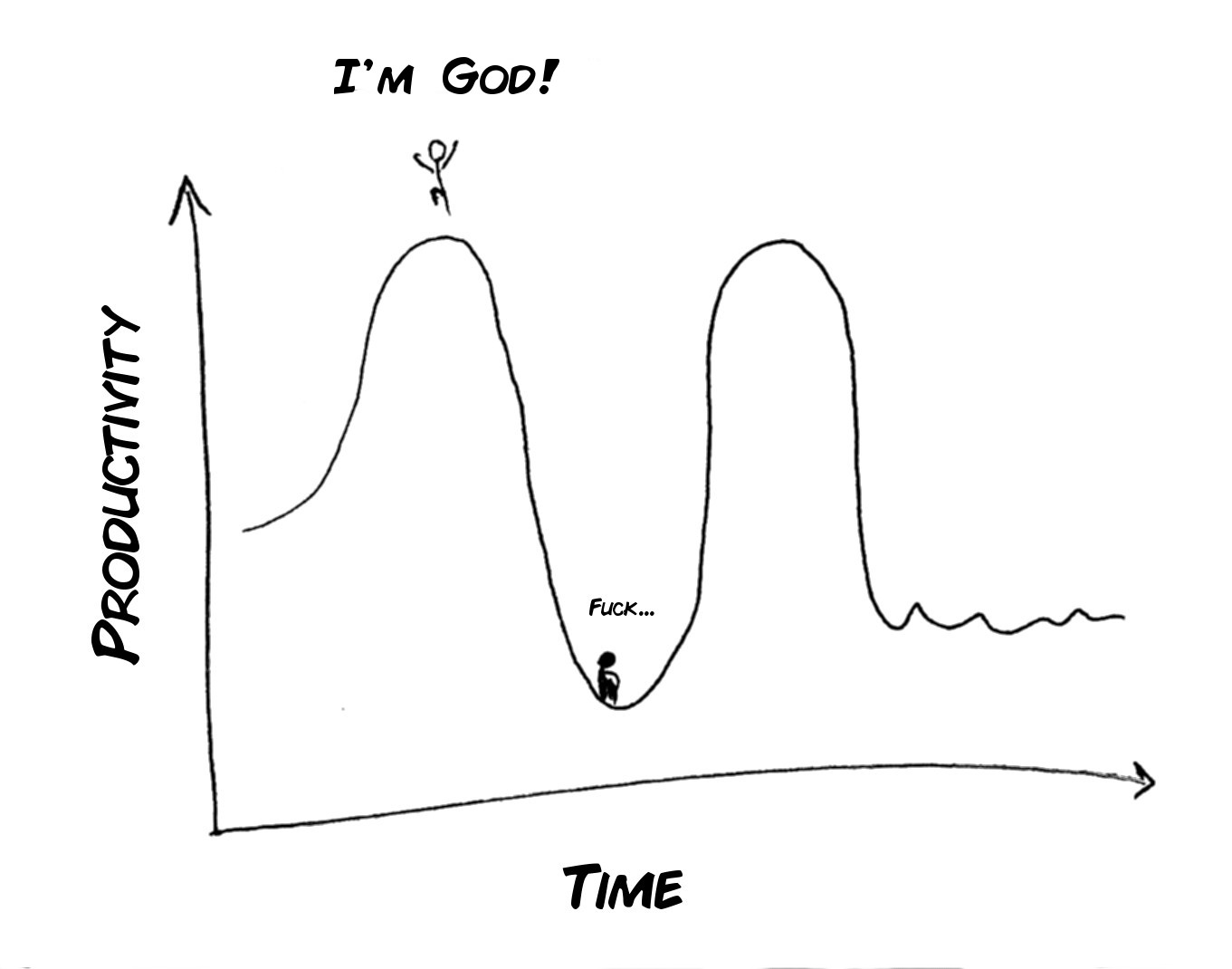 Basically, you push yourself so fucking hard that you become a superstar in a week, and then all of a sudden you are under a rain of hopelessness. All depression triggers start clicking and you are lost. At best, you spend a week of depression and start rising to productivity again, but that’s it, it’s a cycle you never exit and it gets worse and worse with every iteration, your depressions become longer and longer unless you understand you don’t need to climb a slope of 89° to become a superstar, you can do it on a 45°, or even 20°, or even 1°, only it takes patience, but works out much better!

I used to be on High-Frequency Fuck-ups for almost a year, after entering college and getting a job at the same time, I was under a lot of pressure, I wanted to be best in my work, and in my college, and in everything! Okay, that’s not bad on it’s own, but I was on the wrong road, I thought that’s the way it has to work, you push yourself for some time, get 5% of the road down, and then you get depressed, but you just have to go through it. But I was wrong, badly wrong.

I only got more and more frustrated with my life, I started hating my job, hating my college and everything in between. My depressions used to be a few days at max after each iteration of superstar-ism at first, but it got worse until I reached depressions of two weeks. I couldn’t attend to my exercise anymore, I wouldn’t read the books I wanted to, even my social life was breaking apart, I was dead, I only knew how to work some stuff out in short spans of time, but I couldn’t control the side effect it brought, the depression.

To be honest, those superstar peaks felt really good as I would actually accomplish things I couldn’t do before, in a just week! That’s why I kept this habit for a year, but at some point I realised this is not going to work long-term, with the rate of depressions getting longer and longer, I was risking my life, who knows what would’ve happened once I got to a whole month, or even two months of depression, and I couldn’t be saved, I was in a state of denial, I thought “These people don’t understand! That’s the path you have to take to be great!”, so I wouldn’t listen to anyone telling me to slow the fuck down.

At the time, I had two roommates, and they knew about my state, it was so visible, I would work like robots for a week, bumped up and excited, and then I would go down for the next week, feeling groggy and sad the whole time.

One night I and one of my roommates, Saeed, started talking, not directly about this topic, but we got there and he told me I should slow down and move at a more controllable pace. He was not the only one telling me that, I was told this a lot, either directly or indirectly, but I always denied it. This time, I thought about it, a lot, because I was tired of my High-Frequency Fuck-ups, yet I was not sure if he was right or I was, so I continued my High-Frequency Fuck-ups for another two or three months before deciding I should at least try slowing down.

I slowly slowed down, the depressions went away, I would accomplish the things I wanted, only slightly longer, but damn, it was great! I could continue getting stuff done without feeling fucked up and crying whole days and nights in my bed, I could do the things I loved without any fucking side effects!

At first, I had the doubt “Am I becoming one of those people? People who don’t get things done and don’t grow?”, but after some time, I realised I am actually getting things done much better! It was easy to see for me and the people around me that I was much happier, I was in control of my life and I was enjoying it. The only difference was patience, instead of rushing to get the next big thing done in a short amount of time, I took patience in checking my list off, and suddenly everything was much more fun.

Now I study, play an instrument, exercise everyday, go running, read books, watch movies, write, eat and sleep well all at the same time, and I don’t feel a bit depressed. Sadness is something, depression is another, I do get sad, but not depressed. I feel alive and active.

I’ve become much better socially, my interactions with my friends are much more alive now. I could see it in my friends’ eyes when I used to be a robot, they were like “What the fuck is going on with you man?”, yes, exactly that phrase, but now I’m no longer a slave of High-Frequency Fuck-ups, I have so much fun with my friends.

The takeaway is, stop High-Frequency Fuck-ups, slow down, take things one bite at a time and you will eventually accomplish what you are aiming for, if only with a little more patience, you won’t have depression blocking your way and fogging your brain every other week.