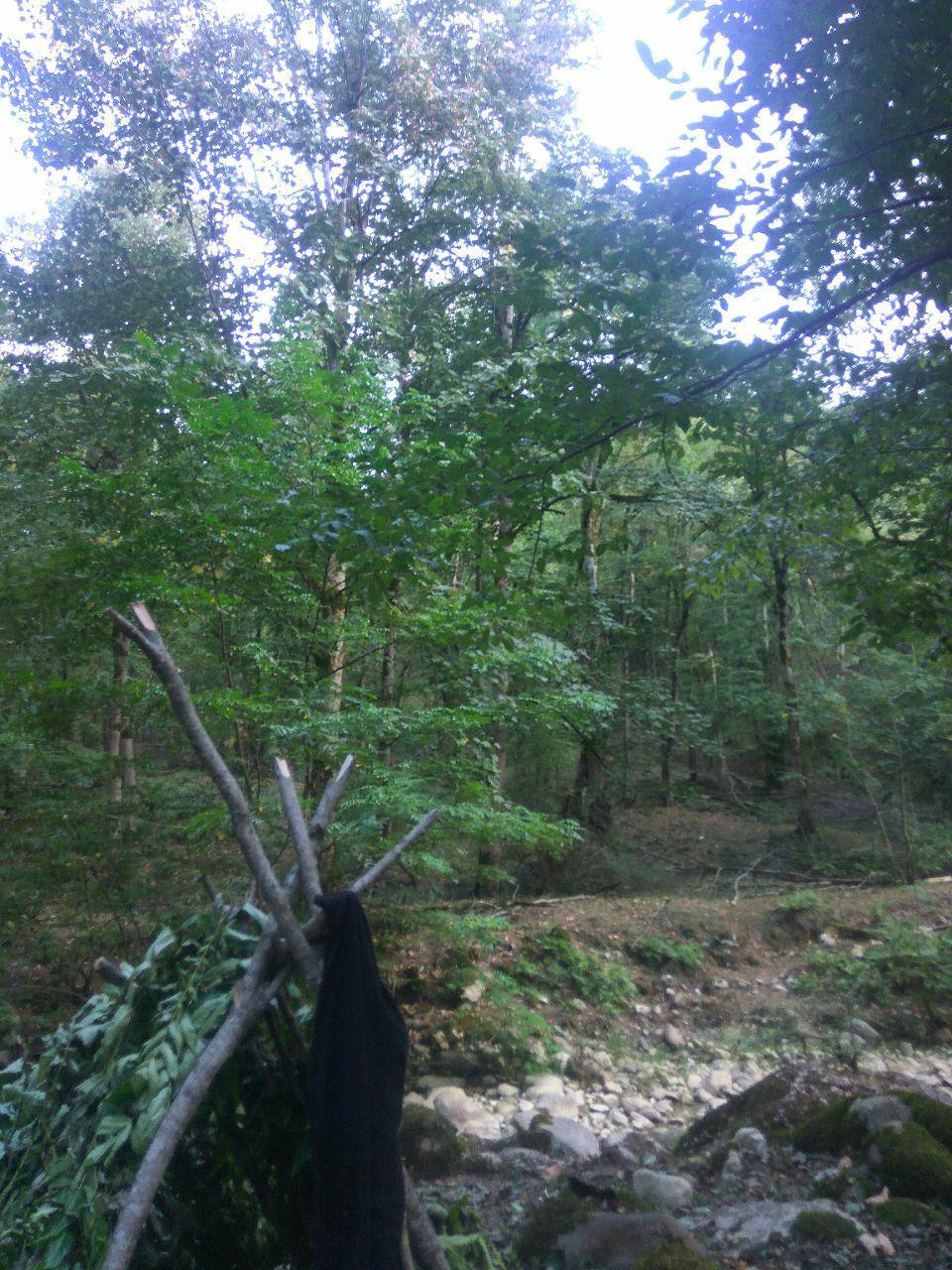 So I just went on my first primitive living practice trip in the woods, alone, with only a pocket knife.

I decided I’m going to share the lessons I’ve learned in each trip as they are certainly going to be useful if you want to practice primitive living, I would find these useful if I could find them anywhere. I spend a lot of time reading and watching primitive living guides and experience reports, but they are never exhaustive, and this series is not meant to be exhaustive either.

What I did know

I spent a lot of time studying about edible wild plants, how to butcher and cook different kinds of animals and insects. I also had practiced fire by friction and read a lot and watched videos about theory of making cordages, making a bow-drill and so on. I also knew and had already built shelters for the night. So you can assume I had a basic, broad understanding of the necessary skills, but experience? Not so much.

I had a pocket knife, a Garmin GPS and a pocket first aid kid, I would expect something to go wrong along the way, so I thought I want to be safe, but not comfortable, that’s why I brought emergency necessities, but not any comfort tools and materials. I also had a canned tuna for my first breakfast, but nothing more.

Now for what is worth, I’m going in around summer’s end, September 5th, in a forest in northern Iran, Mazandaran Province. The forest starts from foothills, covering a few mounts from both sides, so it’s pretty large but also mountaneous, so I it’s hard to move in the forest.

So I arrived at the entrace of the forest at night, it was already dark and I couldn’t build a shelter or do much, I just slept on the open ground, it was my first night in the woods alone. I was quite scared at first, lots of cracks and movements in bushes by unknown creatures, but after a few hours I figured out all these creatures are small ones that can’t be harmful to me. A few hours before dawn it got bitter cold, and I woke up, unable to go back to sleep. The first night was not the best, but could be worse.

I woke early at dawn and started moving into the forest, looking for a place to build my shelter in. I decided I’m going to follow these steps:

But as was expected, it didn’t go according to the plan. 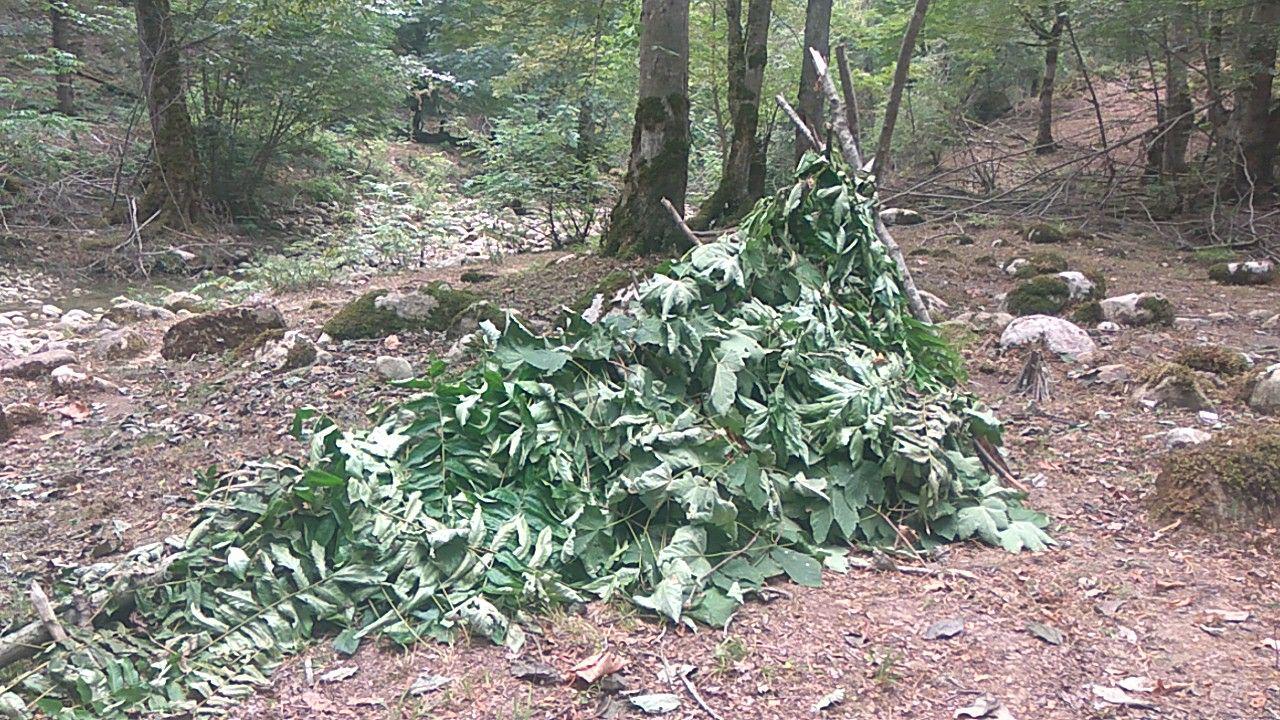 I found a nice place to stay which had a stream passing by, the stream was running and from what I knew about the area, the water was safe to drink, so water was no longer an issue. I started building my shelter, got the base wooden structure down first, but there was a catch: I couldn’t find any dry debris to put on top or inside. Last time I had built the same shelter it was autumn’s end/early spring, so there were lots of dry, fallen leaves on the ground; But this time it’s in the summer and there very few, scattered dry leaves on the ground, uncollectable.

I decided I’m going with leaves of a small tree I had found nearby which seemed to be abundant around the area and the branches had lots of close leaves on them, looked like a good choice, but it was green. I didn’t find out what I was doing wrong until I tried to sleep at night. The green leaves attracted lots of flies and insects and all sorts of annoying disturbances, and the smell wasn’t helping either. I had to endure the insects throughout the night, because sleeping outside the shelter was a no-go, the dirt beneath was too cold. I hadn’t put as much leaves on the ground, and the leaves were green (which also means they take more heat away), but still, it was much better than sleeping directly on the ground. 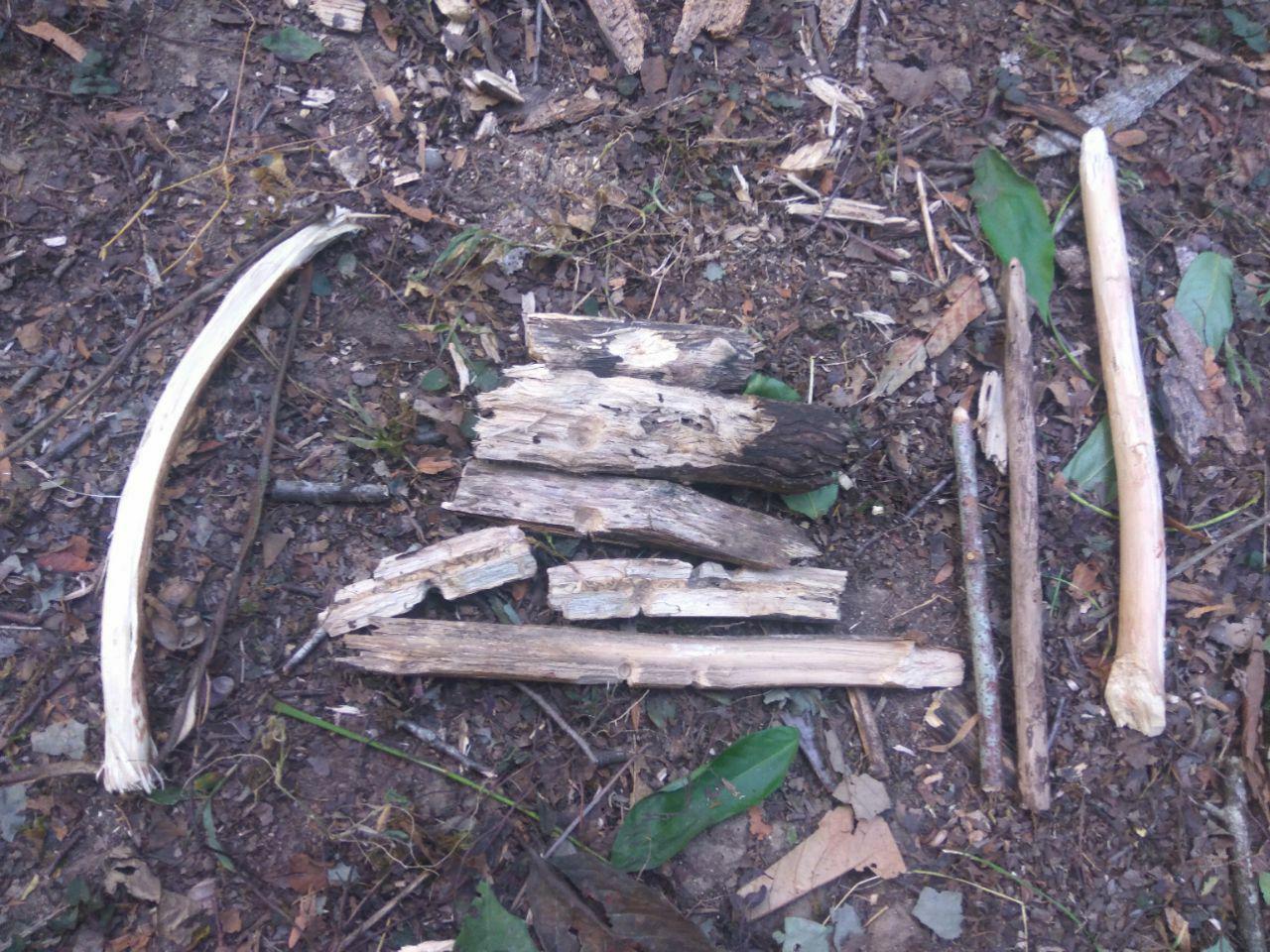 The most important part of primitive living is fire, without fire you can’t cook, you can’t stay warm and you can’t defy nocturnal predators. You also can’t repel insects. You can’t make a torch, so there goes an infinite list of fire applications that you will miss.

I knew the theory of friction fire in and out, how and why it works, but what I had missed was, you are going to be in real trouble if you can’t find softwood. To my surprise, searching portions of the forest, I couldn’t find any softwood tree. Oaks were everywhere, as well as quite some other species of trees, but all of them were hardwood.

I tried different combinations of the softer woods I could find, but none of them resulted in an ember, I got smoke with one combination, but that was it. After about 5-6 hours of trying, I got real tired and gave up. By the way, I tried hand-drills, I couldn’t succeed with bow-drills as I couldn’t find suitable cordage, I tried with a promising bark that was pretty strong, but it would break as soon as I put some pressure on it, It’s also possible that I might’ve gone wrong in making the bow itself, so it would cause the breakage.

So the lesson was make sure the material you are going to practice with is available in your practice area, had I known there were no softwood in that particular forest, I would change my destination and probably succeed somewhere else. Sure, a professional survivalist must be able to start a fire in almost all situations, but this is practice and you have to start with easier steps.

I ended up shaking for 2 hours before the dawn, not a pleasant experience at all. :D

The difficulties didn’t end there, without a fire, my only hope for food was specific edible plants which can be eaten raw, or fruits. Unlucky as I was, I couldn’t find a single fruit-bearing tree in the forest (I found quite a few fruit-bearing trees along the roads and paths to the forest, but not inside the forest itself), and I also couldn’t find any of the other edible plants (I was mostly looking for the onion family) that I knew of.

One of the greatest complications when starting primitive living practice anywhere other than the U.S. is that almost all guides and materials on the topic are from, and for Northern America. The Falcon Guide to Edible Wild Plants that I read is all about northern american plants. I knew it, but it’s also the case that the Northern Hemisphere of the Earth have more common of an ecology, so most of the plants found in Northern America can also be found in places like Iran, but they have their differences. Most of the tips and tricks provided in different resources are for Northern American forests, which do not always work in other places.

So all in all, I ended up not eating anything for the next 24 hours, until I got out of the forest.

Apart from all the physical failures that I faced, which in turn caused frustration, I also had strong feelings of loneliness, boredom, and fear upon me. It was after failing to start a fire that I really felt the psychological burden on me. I had read about similar experiences, but believe me, the experience is hardly transmittable by words. A local rancher passing by the forest telling me about the leopard in the forest didn’t make things any easier.

The psychological pressure was above all other difficulties, at some point I was bursting into tears, but I couldn’t associate it with any one specific feeling, it was a mix of anger, loneliness and fear.

Anger and frustration because I couldn’t succeed in what I was trying to do. I also cut my finger at some point while carving the woods, so there was that.

Loneliness because I was all by myself and I had no company to talk to. You can really actually go insane, as seen in Cast Away, after prolonged sessions of loneliness in situations like that. Mine wasn’t long, it was only two days, but I still experienced the thought-fog, I couldn’t think straight.

Fear because I felt weak compared to the power of nature, my fear was doubled by the fact that I was alone. I felt like being in a place where everything seems to know what it is doing, but I don’t; I felt lost, not knowing what to do after my basic plans had failed.

Now I don’t know if there is much you can do about the psychological part of it, I think experience is the remedy, at least I felt how different it was between the nights, the first night, even though I wasn’t even inside the forest much, I was almost at the border of it, it was much more creepy because it was my first time, but the second night, I was in the forest and now I had a leopard in my mind pouncing on me, but I felt less fear and was more comfortable.

But in the end, what helped me was that I knew I was going to face a huge mental challenge along the way, so I was more prepared. I think it’s utterly important to be prepared for such psychological situations, knowing the reason behind your psychological challenges can help you overcome it to some extend.

The second and last night was not all that much interesting, but it was damn sure cold and hard. At first I had to deal with the insects biting me everywhere and my feet scratching while trying to sleep in the shelter that I had wrongly built. After getting over that one and sleeping for what seemed to be ~2 hours, I woke up and felt the air temperature decreasing. I still got to sleep in intervals of 30 minutes until I woke up at around ~4 AM and my whole body was shaking. I couldn’t do much, all I did was gather the leaves underneath a little closer and more dense, and crunch my body into a ball so I felt just a little warmer, but still shaking. It took ages for the last two and a half hours to pass until dawn. At dawn I got up quickly and walked around a little to warm myself up, and then waited until I could barely see my surroundings, then I started walking out of the forest.

Initially I had decided to stay for longer, but the weather forecast had predicted a heavy rain and storm for the next night, there was no way I could withstand that. :D

It was a hard trip, I lost about 2kg (4lb) weight, but all in all the experience was a good one, I certainly learned a lot and I’m not going to make the same mistakes again. I should definitly practice more and keep working on my skills.

If you are looking forward to practicing primitive living, please make sure you are safe and start small.

Success is going from failure to failure without losing your enthusiasm. —Winston Churchill